Band of the Week: UVERworld

Having made the Oricon Charts quite a few times, these guys have come a long way since their start in 2003. Back then they were called "Sound Goku Road", which became "Sangoku Road" on the streets, and consisted of 7 members. 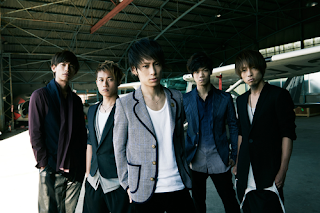 As Sound Goku Road they released only their demo, Prime '03, which ended up being a wild success. However, when saxophonist Seika and their vocalist left, the band renamed itself to UVERworld and started operating under that name to date.

In 2005 they signed up with G8! Records, under Sony Music Records, and released "D-tecnolife". Some of you may know this song from the anime Bleach, it was used as its second opening theme. Their second single "Chance!" was used as a theme for PSP game of Bleach: Heat the Soul.

Both these had made the Oricon Charts, and it would only get better for them. In 2006 their 3rd single "Just Melody", first album "Timeless" (in which Seika briefly returned on saxophone) and 4th and 5th singles "Colors of the Heart" (for the anime Blood+) and "Shamrock" respectively also all made the Oricon Charts at some point.

By 2007 they had become a well-known name among anime fans, and their second album "Bugright", of which more songs were used for anime openings or endings. That same year they also performed at the "We Love Music Vol2" event in Shibuya Axxe, against the band SID.

The next year another album made its way to the public. "Proglution" contained singles like "Ukiyo Crossing", "Endscape" and "Shaka Beach: Laka Laka La". In the same year, more anime openings/endings were released as singles, such as "Hakanaku mo Towa no Kanashi" which was used for the second opening theme of "Mobile Suit Gundam 00".

One more year, one more album. 2009 saw the release of their 4th album "AwakEVE", a DVD of their live in the Nippon Budokan hall, 13th single "Go-on" (used for the opening theme of the Japanese broadcast of popular series "House"), another DVD of the AwakEVE tour, single "Kanashimi wa kitto" for the drama "Shoukoujo Seira", their best-of album "Neo Sound Best" and perhaps most remarkably: an English website.

Their 6th album was released a year later (has it become tradition to release one album each year?), titled "LIFE 6 SENSE". Their 20th single "BABY BORN & GO/KINJITO" followed, as well as 2 more live DVDs ("UVERworld 2008 Premium LIVE at 日本武道館" and "LAST TOUR FINAL at TOKYO DOME").